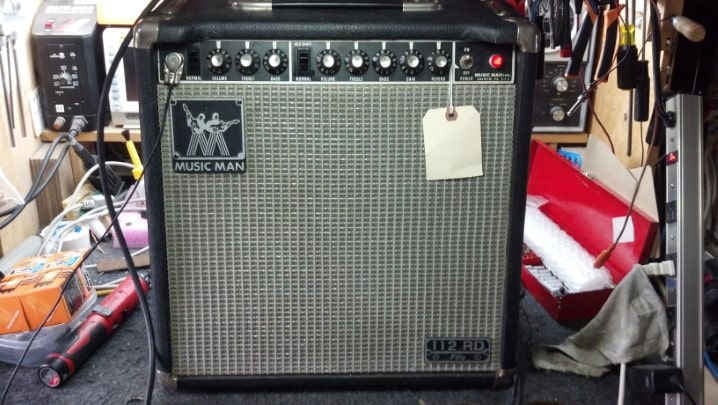 AJ played this wonderful MusicMan combo amp, until it quit suddenly. He was aware of the Big Names in the music business that repaired these, but was there anyone local? D’oh!

As you might expect, this combo has one 12 inch loudspeaker and has a fifty watt Class AB push-pull pair of 6L6 tubes. One vacuum tube serves as a preamp, and the rest of the amp is built with solid state techniques.

This looks a lot like a Fender amp, doesn’t it? Leo Fender had sold the Fender company to CBS, but wanted to continue making instruments and amplifiers despite a non-compete agreement that he was required to sign as part of the deal with CBS.

So the MusicMan amps were born. The Mid-shift switch indicates a slightly different tone stack design.

IIRC, production was shifting away from the Fullerton factory to Anaheim, with offices in La Brea California.

The rocker switch for the ground select function and a three wire power cord is evidence that the older design of Fender amps was changing to meet modern regulatory requirements.

Of course, model numbers were entirely new, and serial numbers had little resemblance to the old way of doing things.

I have no idea what the paper label to the right is for. Any ideas, anyone?

The chassis is sound, if not a little cosmetically ‘challenged.’ We can blame the humid Gulf Coast environment.

Another change from the Old Fender was this pilot light, which consists of a neon bulb and a limiting resistor. The package is held in with a push nut.

Yet another thing we don’t see here is the iconic brass sheet upon which most of Fender’s controls and jacks are traditionally mounted.

The wire harness dress is excellent as is the workmanship. The black switch is the Tone Shift switch seen earlier on the front panel.

These front panel controls work smoothly and are noise-free.

The Bright/Normal switch is found next to the input jack.

The dual-section 12AX7 lives here. This amp has been re-capped, including cathode bypass capacitors and all electrolytics. I’m not touching any of this!

The rear panel jacks are Switchcraft, the best you can get.

This ‘death’ cap is original. The red paint on the solder joints is an interesting way to indicate that they passed QC. This makes it easier to see where past rework/repairs have been done.

Most of the preamp duties are done with operational amplifiers. Those connectors in a square configuration are for the reverb tank and pedals.

This unit is very well built and maintained.

Can you see the problem? The pair of transistors on the pink heat sink form a phase inverter that drives the output tubes. In the 1970s, televisions, ham radio gear, and other consumer electronics were commonly built using ‘hybrid’ techniques e.g. solid state parts with power tubes. Leo Fender knew his TV stuff, and applied that technique in his new line of amps.

These high powered resistors are part of the phase inverter circuit. They must be matched closely for good performance. Obviously, these are no longer matched.

The devices on the heat sink are 75 watt 15 ampere 80 volt power transistors. They should be closely matched for best sonic performance. Also, transistors will drive the next (tube) stage with a bigger voltage swing than two sections of a vacuum tube, because they are inherently lower impedance.

The main board is coming out of the chassis so that we can solder and desolder parts.

In the late 1070s, circuit board design was performed on computers. Thus, graphical images could be added to the artwork. Also, this circuit board is electrochemically plated tin, which is a fresh new technology not previously seen in Fender products.

On a lark, we will measure the value of the remaining 6.8 ohm resistor.

It reads a little high. No problem. The resistors will be replaced with a matched pair.

The old transistors are coming out for testing.

The transistor curve tracer shows that this part is good.

The other part is shorted internally.

The heat sink is removed and the old resistors are desoldered. Here, we’re cleaning up the circuit board where the resistors go.

These two parts were sourced from new stock and selected because their value matches better than 0.1%.

These transistors were sourced from new stock and were matched on the curve tracer. See the new resistors above and to the left?

The solid state phase splitter drives the tube stage as it should.

The tubes are in and it’s time to fire it up!

This amp comes with the official MusicMan pedal, controlling reverb and distortion.

When a function is selected, the LED comes on. This is nice on a dark stage!

This unit is ready to go again!