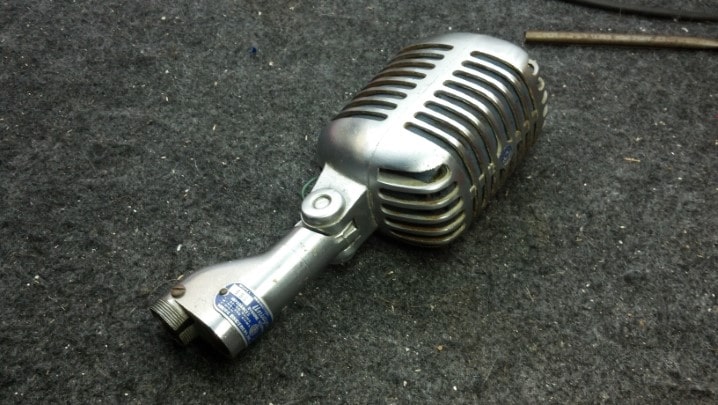 Dr. Shoen’s girlfriend at the time found this microphone in a dumpster behind a church. What did he really find, and could it be more than a theatrical prop onstage? The Unbrokenstring Crew goes to work!

Shure Brothers built this iconic microphone at the factory in Evanston, Illinois in the years between 1951 and 1961. The art deco design is recognized around the world as “The Elvis Microphone.”

The 55S is a smaller version of the Model 55 Shure Brothers microphone first produced in 1939.

Unidyne is a term coined to reflect that a single (unitary) microphone diaphragm is employed. The moving coil technique employed to convert sound pressure into electricity makes this a dynamic microphone; Thus we have the word “Unidyne.”

Units with the ON/OFF switch were produced after 1961

The silk wind screen is badly deteriorated. The microphone makes a loud ‘clunk’ noise when it is moved. We need to look inside.

Four screws allow the halves of the microphone body to be separated.

Inside the microphone, we see the element at the top and a multiple-impedance transformer on the bottom.

Two screws hold a bracket that retains a foam vibration dampener in place, which has long since deteriorated and crumbled away. This is the source of our ‘thunk.’

The microphone element lifts out easily once the top bracket is removed.

Some of the foam isolation dampeners remain on the bottom two microphone element supports. These are end-of-life and no longer available from Shure.

It is easy to see places where the silk wind screen is missing.

The matching transformer is mounted along with a couple of boxes that retain the now-deteriorated foam vibration dampeners.

We see the back side of the impedance selector switch in the background, and some set screws in the foreground. What do these do?

The bottom set screw is supposed to hold this spring sheath around the green and orange wires in place.

We need to take everything out.

Inside the top of the microphone case we find this sticker, which records the patent numbers employed in the design of this microphone.

The pivot between the microphone and base needs to come apart for cleaning and adjustment.

This screw can be adjusted to set the stiffness of the microphone head relative to the base.

Graphite washers ride between the moving parts for lubrication.

A dent in the body of the microphone needs to be removed. Yes, I’m using my luthier’s hammer to pound out the dent.

Can you see where the dent was?

The old silk wind screen was glued inside the case of the microphone.

Acetone will dissolve the old glue. It will also dissolve silk, turning this cleanup step into a blue sticky ‘hot mess.’

But a little patience and perseverance yields a clean microphone case.

Warning – Skeleton Shot! I’ll betcha that you have never seen a microphone like this.

We found some sheer blue silk fabric for the wind screen. This brighter blue is not historically correct, as ‘Victoria Blue’ (Pantone 2756) was specified by the factory. However, this blue matches the Shure nameplate and badge.

This is a test.

This soft pillow will be fabricated from Oomoo. Yes, the silicon mold-making resin will be just the thing.

Equal parts by volume are mixed.

And here is our pillow!

We don’t want the pillow to deform the fabric, so these high points are removed by hand with an Exacto knife.

Here is the finished pillow inside the microphone shell.

And here is the fabric, glued and blocked into the microphone shell.

Time to reassemble. The moving joint is reassembled and the cable from the base to the enclosure is reinstalled.

The spring around the cable is held in place with the set screw, as we discovered earlier. This is a nice view of the fabric in the back shell of the microphone. This piece is just a flat rectangular sheet stretched across the back, so it’s easy to glue in place by hand without a block.

The joint is back together. No lubrication is necessary as the graphite washers are doing their job.

A smooth, firm grip at the joint is established before installing the lock nut.

This is what the spring protecting the wires is supposed to look like.

The microphone element works, but I couldn’t resist taking a look at the technology behind US Patent 2,237,298. The hemispherical shell on the back of the element helps establish the cardioid pickup pattern of the element.

I fabricated new foam vibration dampeners, which are installed in three places. The matching transformer assembly goes back where it belongs.

A set of four matching screws are fitted and finished to hold the two halves of the microphone enclosure together.

This microphone was part of the estate of an amateur journalist. As she moved into treatment and into hospice, there were other concerns besides removing the batteries from unused equipment. Could the Unbrokenstring Crew revive this unit and make it usable again? 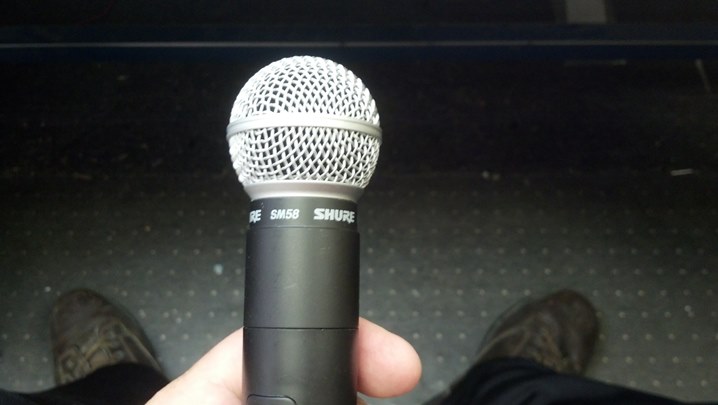 This microphone is a basic SM58 capsule coupled to a battery-operated VHF FM transmitter. 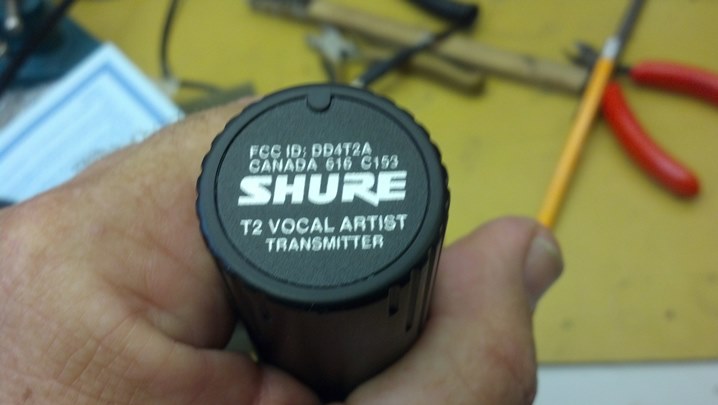 These are often seen in many performance venues as well as in worship, news-gathering, and business settings. 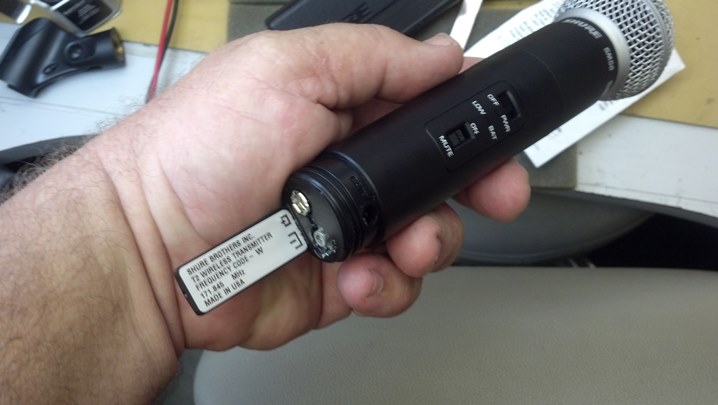 The 9v battery has leaked.  We will need to disassemble the unit to clean up the mess. 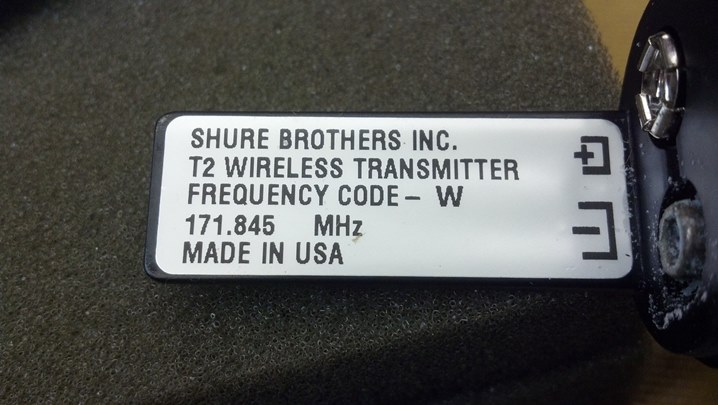 These VHF units are on frequency allocations that are shared with other services and may be subject to interference.  However, these units work well if you are fortunate enough to be in a part of the country where interference is low. 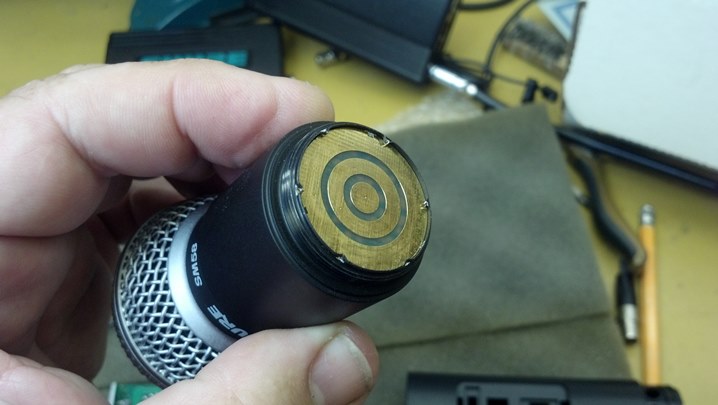 The microphone capsule is built into the head of the microphone, which unscrews from the electronics.  Connections between the capsule and the electronics are reliable regardless of how many turns are necessary to tighten the threaded bodies together. 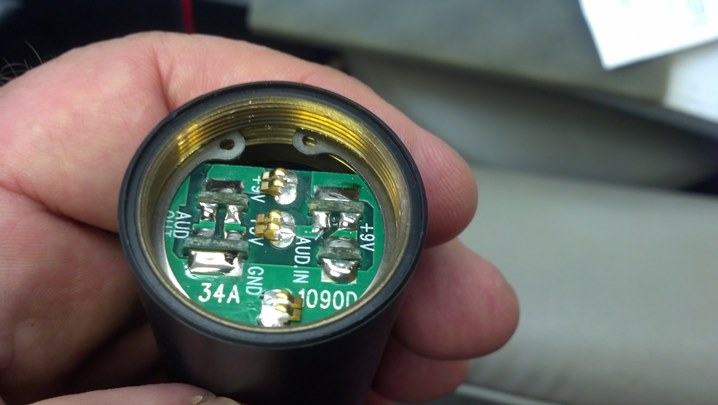 The gold fingers touch those rings seen in the previous picture. 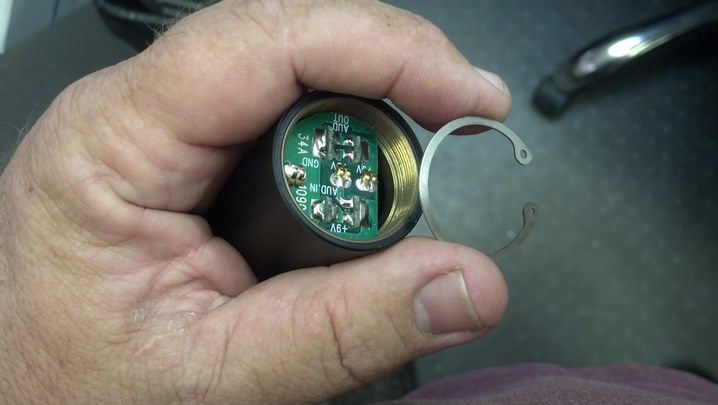 This inside snap ring keeps the electronics inside the housing. 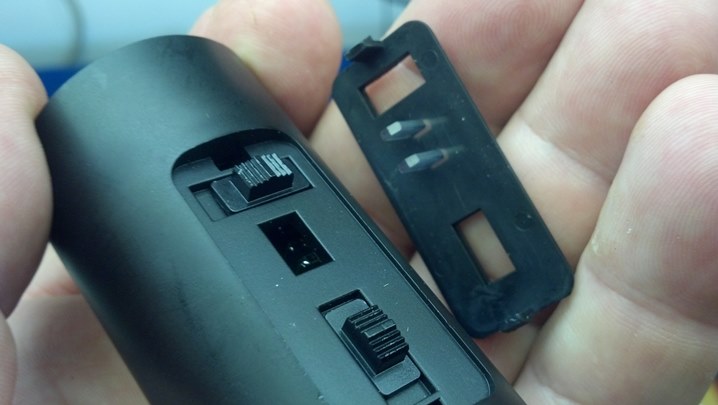 Before we remove the electronics,we need to get the switch actuators out of the case.  The cover removes easily enough. 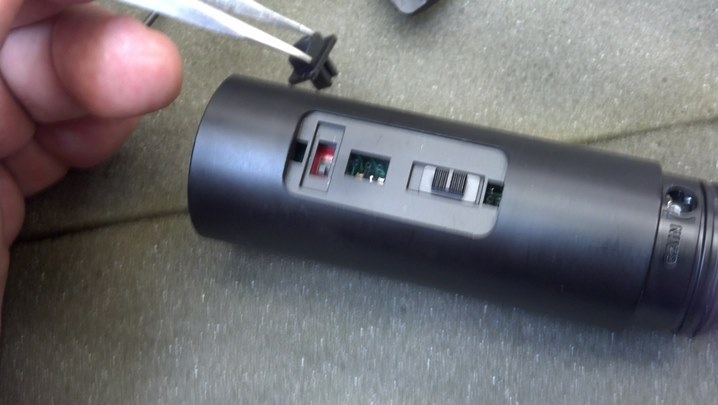 The switch actuators come straight out. 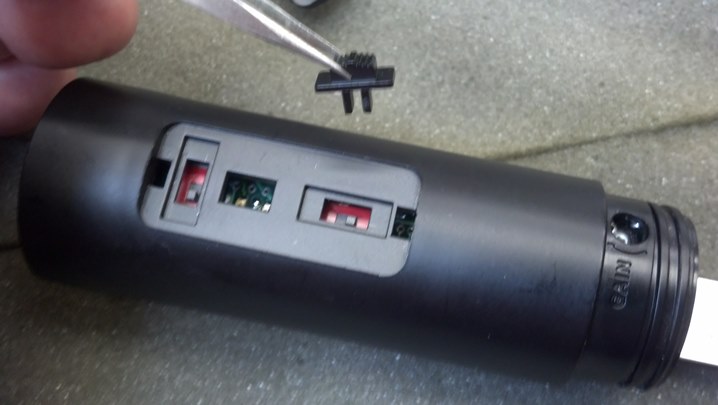 This is looking good!

This is the complete analog FM transmitter. 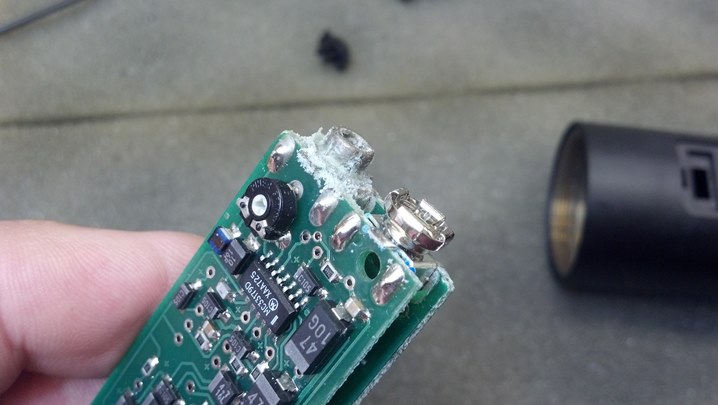 Working with the battery contacts is much easier now that the case is out of the way. 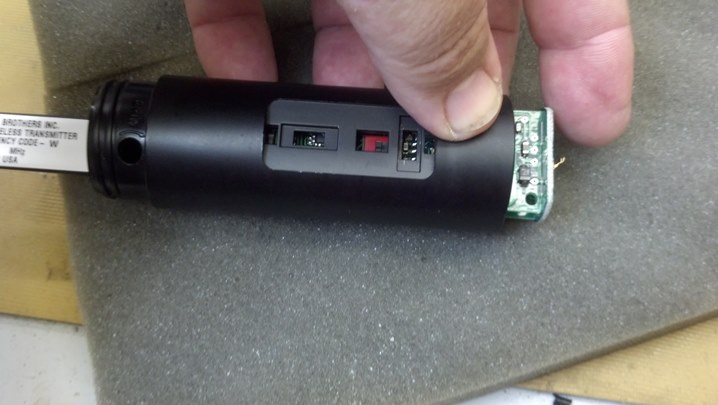 Reassembly is the reverse of disassembly.  Wow, that’s profound… 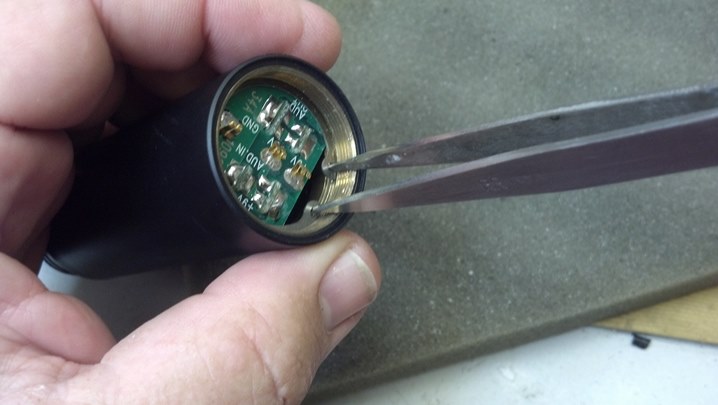 These big tweezers are all I need to get the inside snap ring back in place. 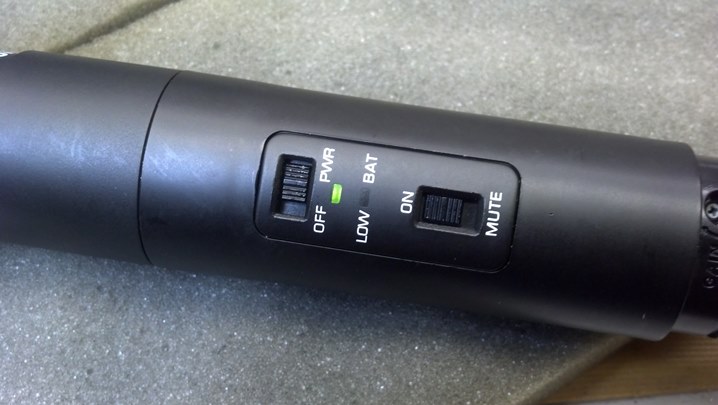 Reassembled, the new battery is installed and we have a green light! 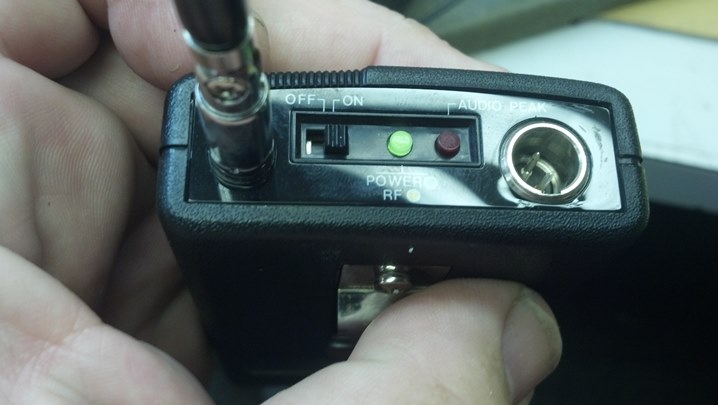 The receiver indicates that an FM carrier is present. 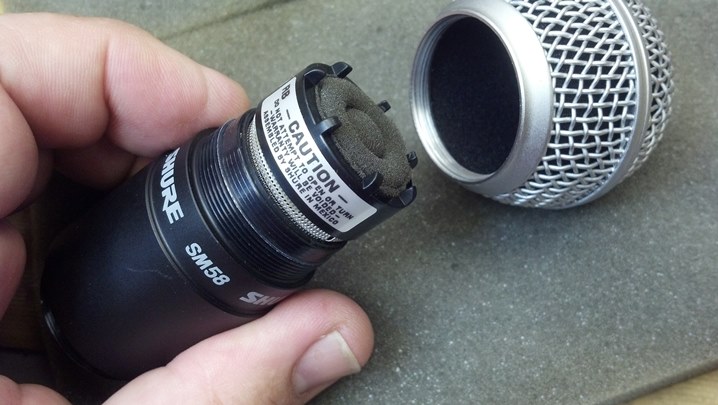 We have an intermittent problem with audio out of the microphone.  We need to look at the capsule. 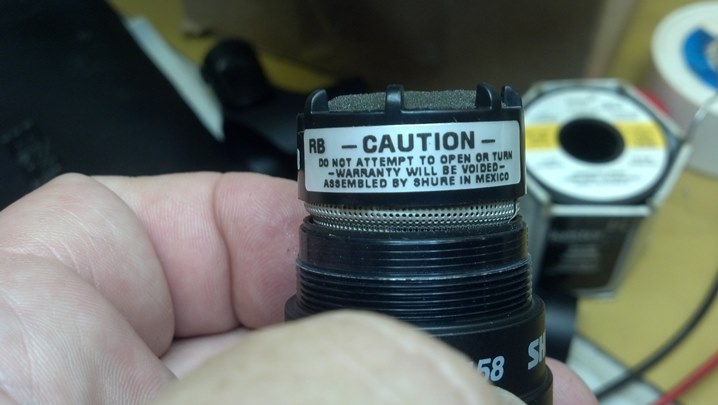 I guess we’ve screwed the pooch by now. 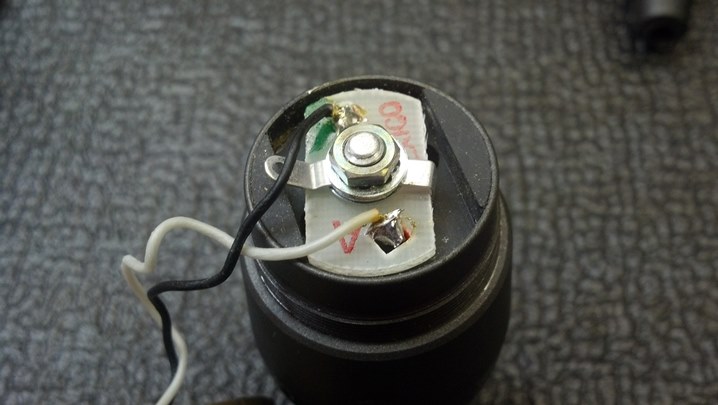 The wires are cracked where they emerge from the solder joints.  These will be reworked. 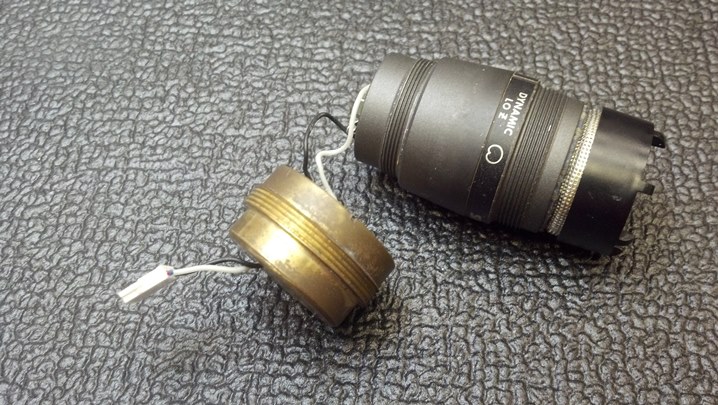 This brass adapter goes between the capsule and the rest of the housing. 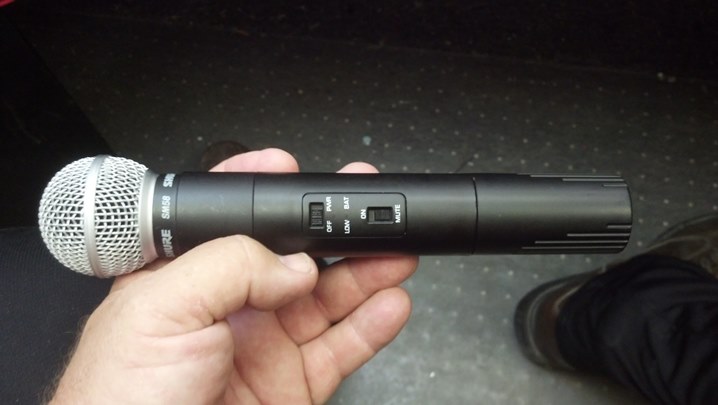 We are back together again!