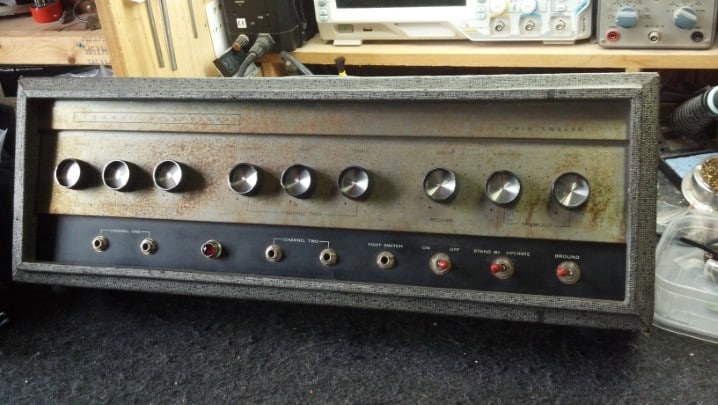 Andy found a ‘beater’ Silvertone amp on eBay and was curious if it could be restored. At first look, it was pretty rough. But could the Unbrokenstring Crew work some magic to undo the damage caused by UPS and previous amp techs?

Danelectro built these amps for mail order distribution. In the 1960s, Amazon was a river in Brazil and the Internet was a military thing. But the Sears Catalog brought you nearly anything you wanted.

The Sears catalog number was the URL of merchandise. With that number, the world was your oyster.

The split splined shaft on the reverb was broken, and the original knob was long gone. The control does work electrically, but the reverb function was not functioning. Or something like that.

The main volume knob was missing, because the split shaft was compressed and didn’t have enough remaining ‘bite’ to retain the knob. This could be repaired.

One of the preamp tubes is a Chinese 12AX7. That tube tested bad.

However, the rest of the tubes were in fine shape and were kept in service. By the looks of the power transformer, I believe that this amp was dropped on its end, because the transformer is leaning to the right.

One of the preamp tubes is original, a Silvertone 6FQ7, made in U.S.A.

The chassis is hand-wired. We are starting at the preamp section. Those brown capacitors are mica capacitors. Wherever two of them are next to each other, they are taped to each other using black electrical tape.

The pilot light is good. The red and blue wires to the right are all shielded signal cables. Power wiring is on the left.

The transformer on the left is an interstage coupling transformer. Masonite, a pressed fiber board material, is used extensively in this unit. Here a big chunk runs right down the center of the amp chassis, and many terminal strips are riveted to the Masonite for mounting components.

Each and every capacitor was screened for leakage at working voltage and capacitance value. Do you see the scorch mark?

These blue wires come from the non-functional reverb tank.

These wires come from the other end of the reverb tank. So we can guess that the reverb tank failed, and some Jake Leg tech just cut it out of the circuit rather than fix it.

So, we will fix it. Note the duct tape holding the whole arrangement together.

We find more Masonite under the tape. Each end of the spring in the reverb tank is stretched between the end clips.

A second point of contact intersects the spring about an inch away from the end. Note that this contact is bent. This is another indication that the amp was dropped on its end.

In the middle of the spring, this wire guys the spring at the center of the tank.

So we bend the bent contact so that it pokes into the spring where it belongs. A very high voltage signal, over one hundred volts, is applied to the contacts at one end. The insulating cardboard on each contact keeps the current from flowing through the spring. However, the high electric field induces a mechanical motion into the spring, which is carried through the spring and wiggles the two contacts at the other end. The wiggling contacts act as a variable capacitor. The change in capacitance causes a varying voltage to be produced, which is amplified and sent to the amp. A moving ribbon microphone or condenser microphone works the same way.

Simple enough, huh? Speaking of simple, we have Upgraded this reverb tank from duct tape to wire ties. Which is kind of a big deal, if you ask me.

The reverb tank lives here. But the chassis is filthy. Now is the time to clean it all up.

A rag is soaked with a combination of solder flux remover and furniture polish, which is tough enough to cut through six decades of crud.

The reverb tank is suspended over the chassis with this bracket. It just bolts on.

A replacement control has arrived. These stamped sheet metal nuts are used to keep the controls in place. The controls are all recessed behind a trim panel. The recessed trim panel makes it a challenge to find knobs that will work on this amp, as we will find out later.

Here, the replacement control has been lubricated and will be wired into its new home.

That sheet metal nut will not take much torque, so it is being tightened by hand.

Next, we will replace this two wire line cord with a three wire cord, so no one will be electrocuted if the power transformer insulation fails.

Two of the line cord wires go to this convenience outlet. The outlet will remain in place, but will be removed from the circuit.

The power switch wiring is being modified to switch only the ‘hot’ wire. The neutral and ground wires will not be switched, per UL requirements. Also, the ‘death’ cap will be removed from the circuit, so that, when it fails shorted, raw 120VAC will not be connected to the chassis. You will find that important if you are holding the guitar at that moment…

Let’s see what we can do about wiring in the reverb tank. These blue twisted wires are snaked through the chassis and will be attached to the terminal strip in this picture. Here is another good look at a pair of mica capacitors taped together.

The little terminal strip in the middle of the picture has the remnants of the original blue reverb tank wires left from where the previous tech disconnected the reverb tank. So now we know right where to reattach them.

Another reason to love eBay is that, from time to time, the Correct knobs can be located. These were surprisingly affordable. Some of the original knobs were repaired with Super Glue and reinstalled.

The unit is back together and ready for final test!

Finally, the Correct knobs really improve the cosmetics of this fine old amp head. The owner wanted to leave the film of rust on the front of the unit, for that Vintage Mojo look. This head sounds fantastic, but the piezo electric reverb tank sounds like something from a Star Trek special effects soundtrack, which, might be just the sound you want!