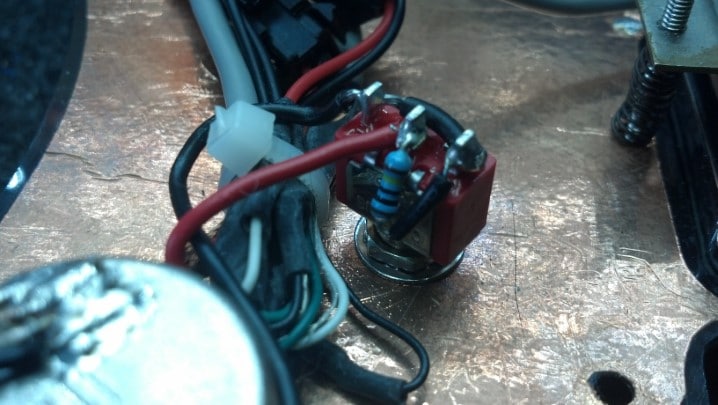 Quyen found this 2013 Les Paul Custom Lite on Craigslist, and purchased it from a church musician.  The instrument was everything he wanted, except the controls were not the traditional Les Paul controls that he was familiar with.  Could the Unbrokenstring Crew make the control configuration a little less ‘ghetto’?  Let’s see what we can do! 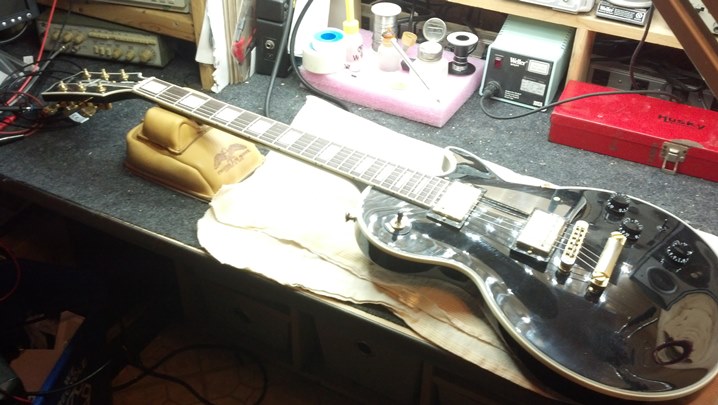 This instrument is really top-drawer.  Bound neck and headstock, gold hardware, totally pimped out!  The body is thinner, partially hollow, and the back of the instrument is contoured to feel a little more comfortable. 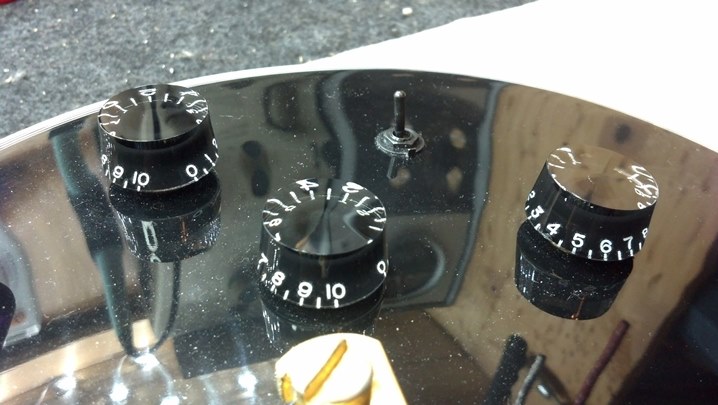 Here’s the rub.  The coil splitting duties are performed by this mini-toggle switch, which takes the place of the second tone control.  The owner wanted the ergonomics of the Custom Lite instrument but with two tone controls. 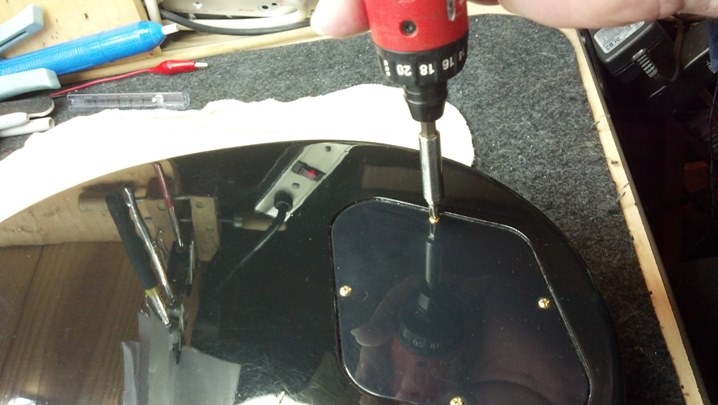 The control cavity is under this plate. 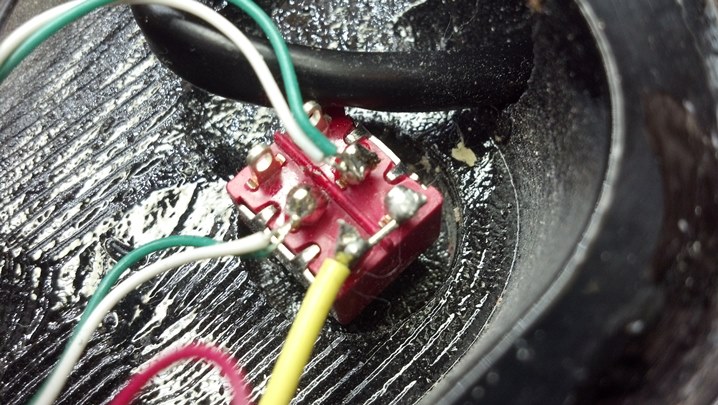 To simulate single coils, one side of each pickup coil is grounded.  The ground wire has yellow insulation. 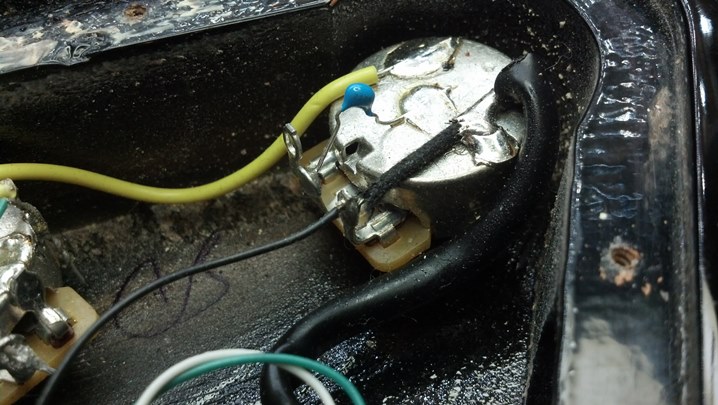 With one tone control to rule them all, this little blue capacitor and the control under it is the whole tone circuit. 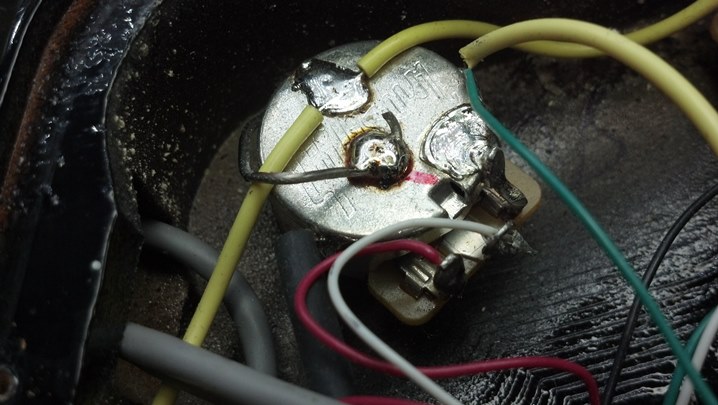 This pic just documents the bridge ground wire.  None of this needs to be altered. 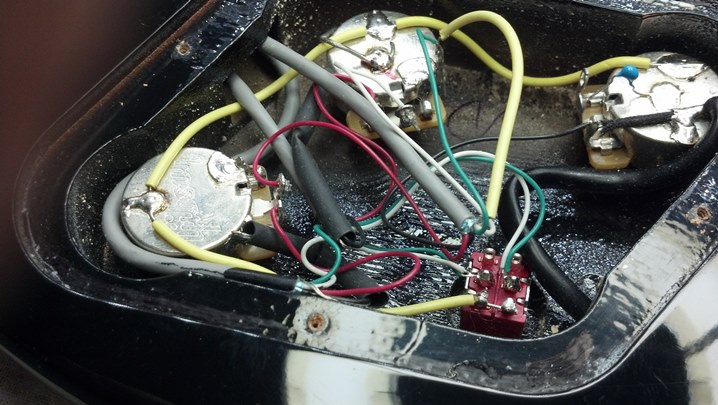 If you compare this control cavity with other Les Pauls, you can see that it is much shallower, because the body is thinner.  Otherwise, it is not hard to visualize a two-volume, two-tone setup here. 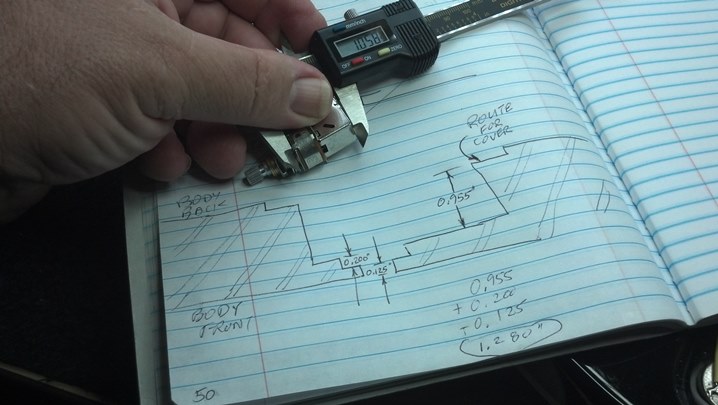 To preserve the ability to go single-coil, a tone control with a push-pull pot is evaluated.  Here, a drawing is made of the actual cross-section of the guitar body at the instrument cavity, and the exact dimensions of the push-pull pot is recorded in the notebook.  Making this modification fit properly will require some careful gun-smithing. 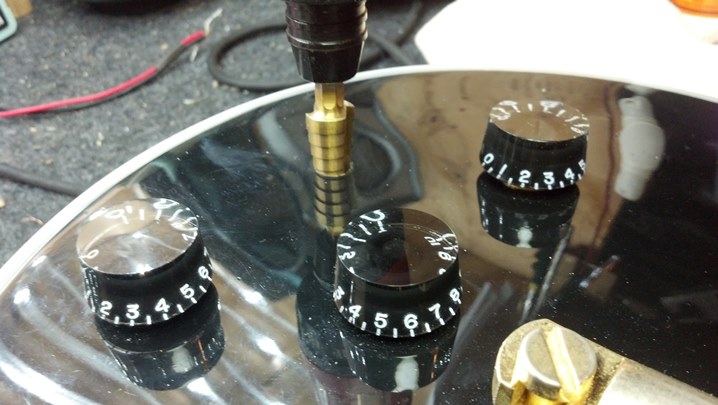 The center of the hole where the mini-toggle switch originally lived is in the correct location for the second tone control.  Here, a stepped bit is used to carefully enlarge the bore in the body to accommodate the push-pull pot. 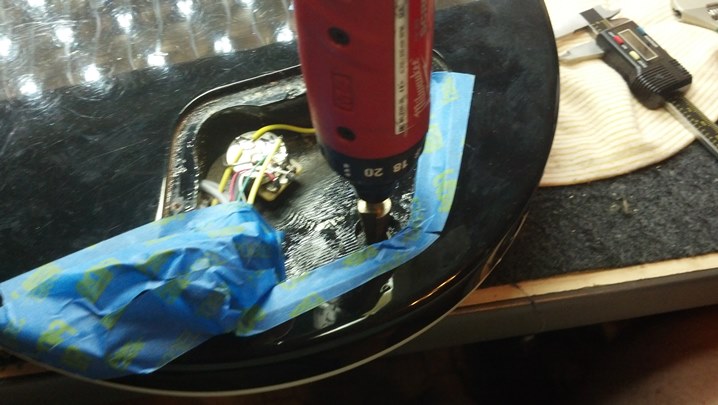 The inside of the hole is cleaned up a bit with the stepped bit.  The loose wires are taped out of the way and the finish on the guitar is protected with blue low-tack painters’ tape. 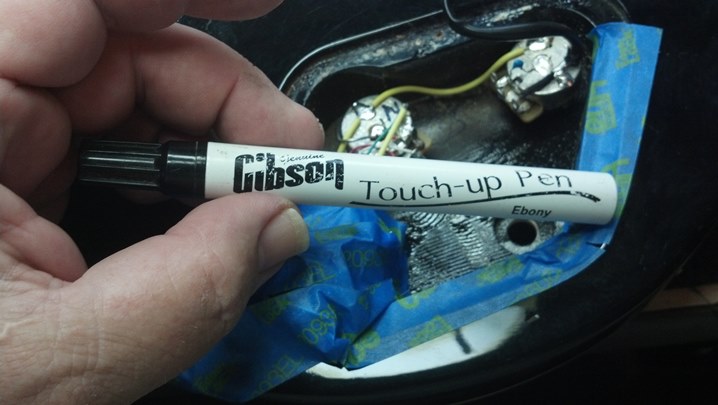 The bare maple exposed by the stepped bit is refinished with some appropriate stuff. 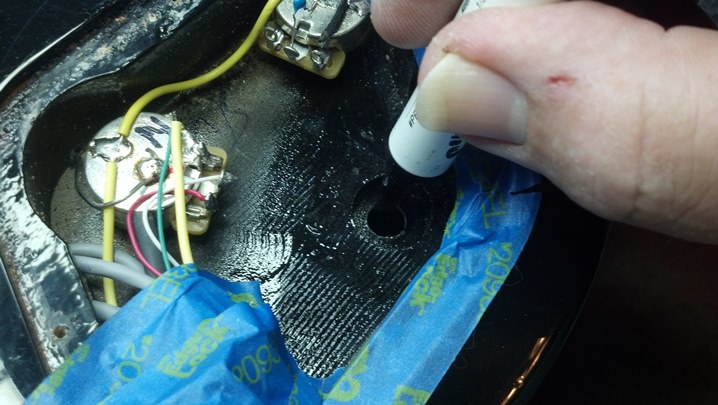 Pushing on the felt tip of the pen dispenses black lacquer.  This step is not entirely necessary, because none of this will be visible, but there is no sense in leaving bare wood exposed to Houston humidity.  And I’m OCD. 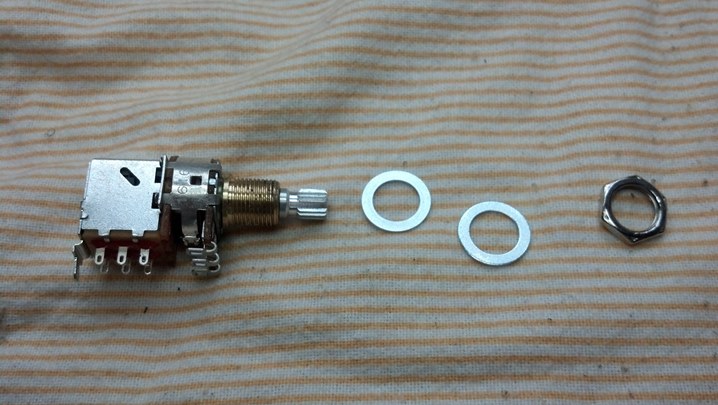 The threaded portion of the push-pull pot is long enough to work in a Les Paul body.  However, the switch portion is nearly too long to fit under the control cover.  Likewise, we will use another nut to get the control knob height to match the height of the other three knobs.  We have some fiddlin’ ahead of us. 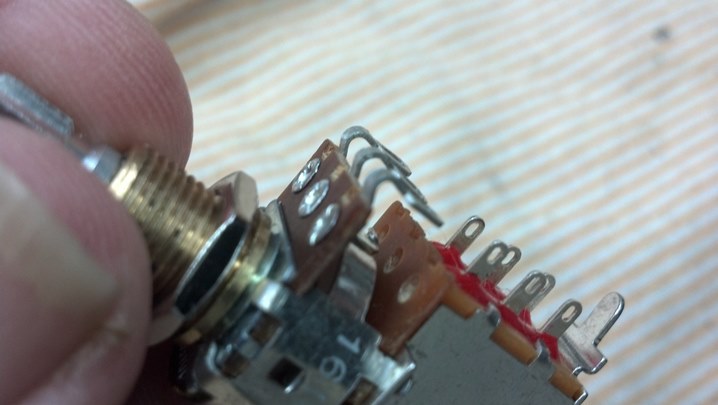 The three bent leads on the potentiometer were bent a little more to keep them away from the edge of the spot-faced recess in the body.  You can see this by comparing this picture to the previous one. 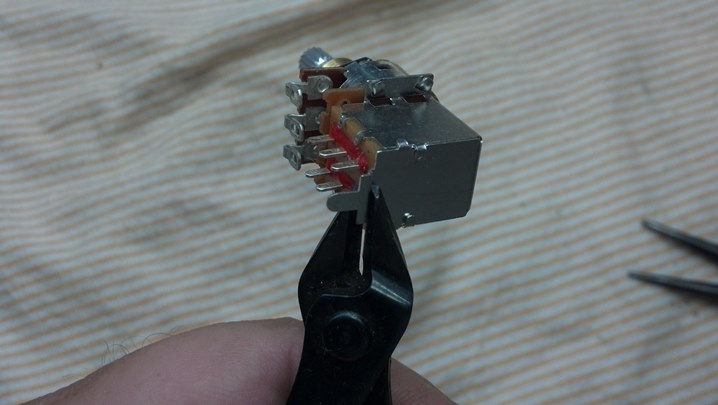 This tang provides mechanical support for those instances when this particular switch is used on a printed circuit board.  But, it extends past the end of the switch.  So, it has to go. 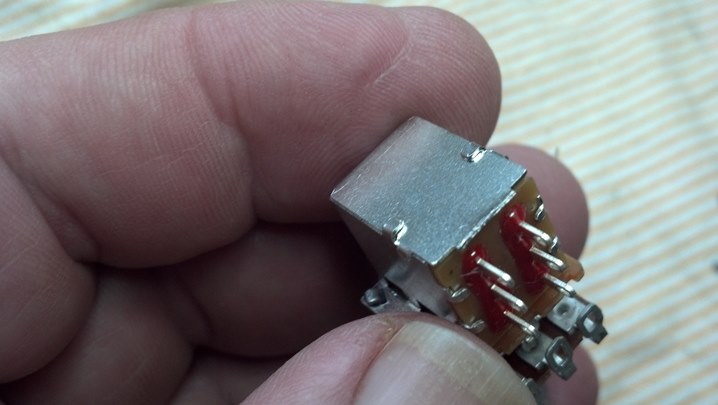 The tang is gone.  The two fingers that hold the end of the switch housing in place were pressed down.  This is about as compact as I can make this assembly. 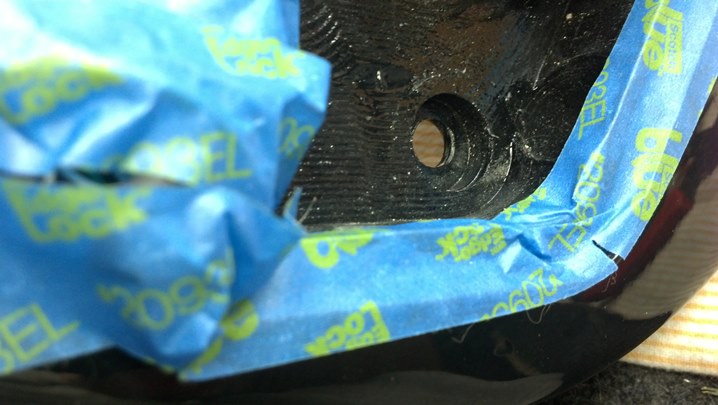 The paint is dry! 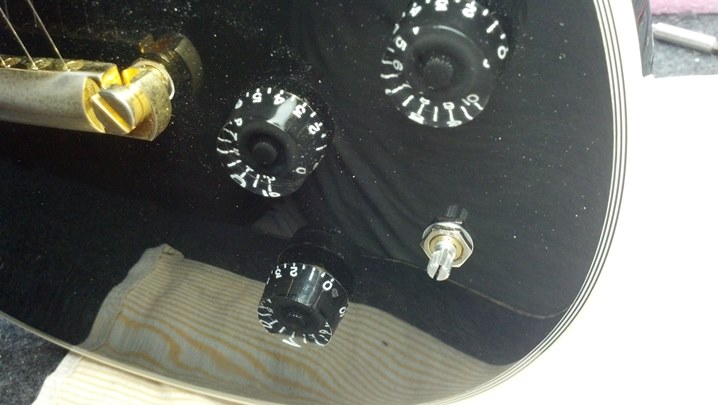 The switched potentiometer is mounted, and the height of the shaft is adjusted so that, when the knob is installed, it will appear at the same height as the rest of them. 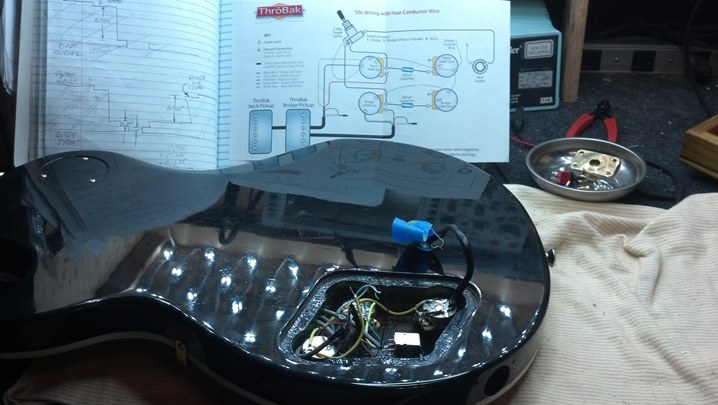 The owner wanted the vintage ’50s wiring for this instrument.  Already, we are about 3/4ths there. 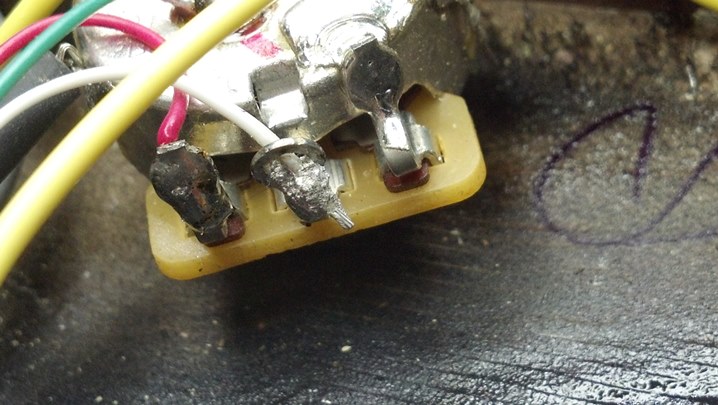 This horrible solder joint was almost certainly done at the factory.  I can’t let this go out of the shop like this! 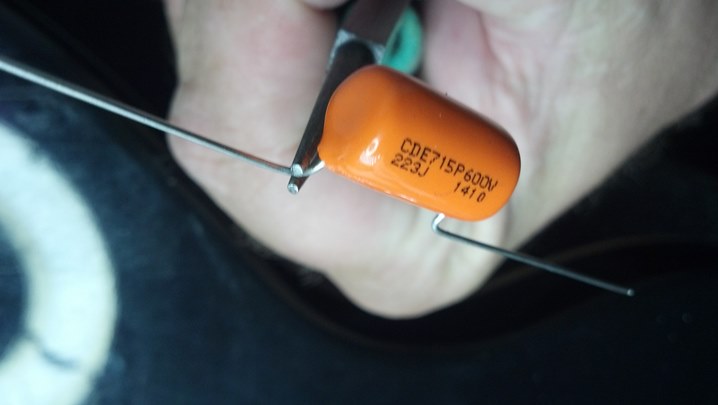 These orange 0.022uF caps are just the thing to match the 50’s wiring esthetic. 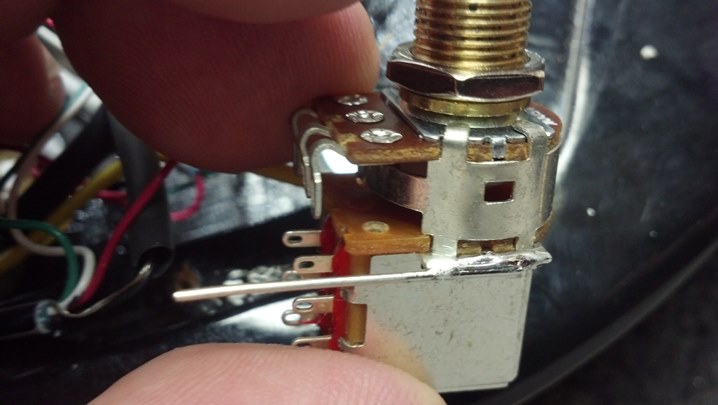 To tie the switched potentiometer body to common ground, I am soldering the ground wire to the interface between the pot and the switch.  That is a weak place that can use all the support it can get.  Just looking at the long haul, folks. 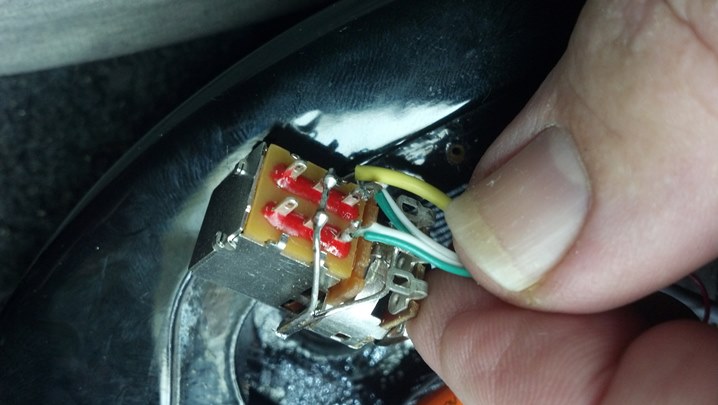 The yellow ground wire is added, and the original switched wires from the pickup windings were transferred to this switch. 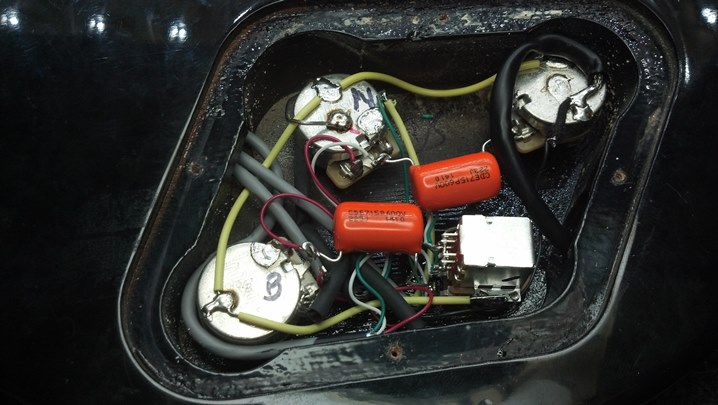 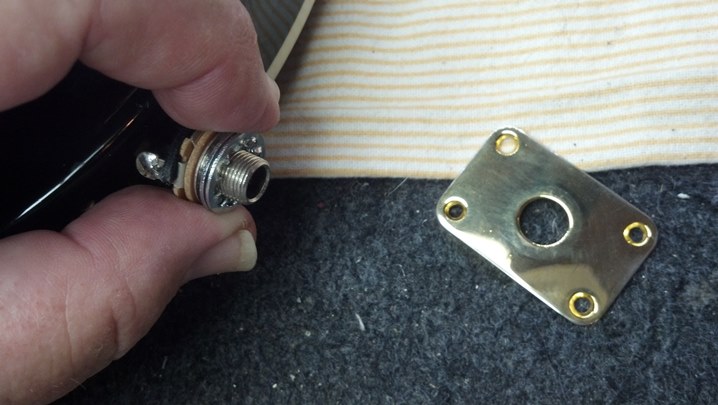 More OCD-ness.  The output jack stuck out too far.  These washers were redistributed and a nut added inside.  I feel better now. 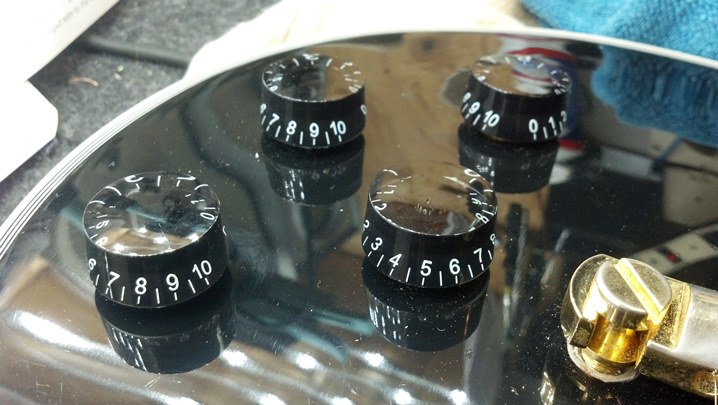 Does this look factory?  Mission accomplished. 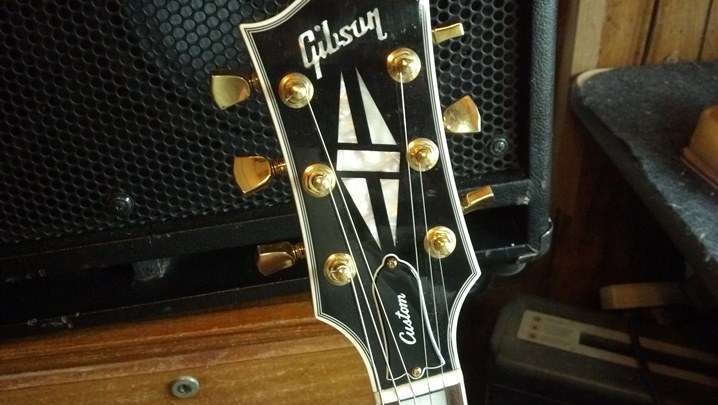 This Cragislist instrument is a real winner!